In the beginning was ... a woman: Mama Margaret: The First Salesian Cooperator 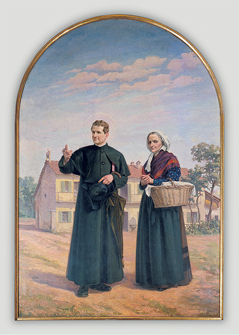 She had given him birth, nurtured him physically and spiritually through his childhood, made great sacrifices for his education, encouraged him in his vocation and had the joy of seeing him ordained a priest. Wasn’t this enough for the widow Margaret Bosco, mother and support of St. John Bosco?

With her sons and step-son settled in life, she, too, had settled down to a life surrounded by her family, loved by her daughters-in-law, a respected matriarch in the small hamlet of Becchi. The rest of her life seemed mapped out for this  poor, illiterate but very wise woman. She, like many others in her situation, would live her remaining years in the peace and relative security of her rural existence -  but ‘God’s ways are not our ways’.

In 1846, during his convalesce in Becchi after a long illness, Don Bosco had decided to establish a permanent base for his developing ministry among destitute boys in Turin. He had rented a couple of rooms in Borgo Dora, a far from salubrious location on the edge of the city. There were other lodgers of very dubious character in the house and only a matter of yards away a local Madam ran a ‘hostelry’. It really was no place for a priest living by himself. The only solution was to ask his mother to stay with him. Trusting in Margaret’s faith and piety, he hesitatingly broached the issue. He asked her to sacrifice the tranquillity of her home to join him in the noise, dirt and stench of a city slum. Apart from ensuring his own good reputation, Margaret’s presence would help to provide a family atmosphere for his boys, many of whom had known little or nothing of a mother’s love. They were ‘nobody’s children’. He was right to trust her. Her reply has been handed down in Salesian lore: ‘If you think such a move is God’s Will, I am ready to go right away.’ Was she aware, perhaps, of the echoes of Mary’s ‘Let it be done to me according to your Will’? So, at the age of fifty-eight, a good age for a woman of her condition at that time, she packed a few belongings and headed off for a new life.

After a journey of eighteen miles on foot, on a dark, dank November evening, Margaret and John arrived in their new home in Borgo Dora.  The news of Don Bosco’s return spread quickly among the boys. For many of the early Salesians, including Fr. Rua, 3 November 1846 was considered and marked as the real beginning of Don Bosco’s work  a work in which he was accompanied by his mother.

Margaret jokingly remarked that she wouldn’t have much to do there as the rooms were practically empty. Such was not to be the case. She set up house as best she could with their few belongings and was there to welcome the unnamed, cold and hungry boy who knocked at their door seeking food and shelter from the driving rain on a particularly bad night. Tucking him into a makeshift bed, she spoke to him  about God’s love, about honesty and work. So was born a tradition which exists to this day in Salesian environments, the practice of the ‘Goodnight’ (or the ‘Good morning’), a hallmark of Don Bosco’s Preventive System.

Days followed days into months and years as Margaret cared for her son and the hordes of boys who came flocking around him. She cooked, washed and mended their clothes, planted a small vegetable plot to help feed them. Gradually other women came to help her  just as priests and laymen were coming to assist Don Bosco with catechism and basic literacy and numeracy classes, not to mention supervising the boisterous games. Together they were forming an embryonic association of helpers of Don Bosco’s Oratory but at the heart of it all was a mother, known to all as Mamma, the first support and co-operator of her son.

The boys and young men, however, were not all angels and in their youthful and thoughtless exuberance often caused problems for Margaret. Her tiredness and frustration came to a head one evening when earlier on the youngsters had trampled over her small vegetable garden and romped though the washing lines, pulling down some of the sheets as in vain Margaret tried to stop them.  That evening as she and Don Bosco were mending the clothes that the boys needed for the next day, she laid aside the trousers she was patching and turned to her son, ‘John, I’ve had enough! I can’t go on! Today your lads ruined the garden; what am I to put in the soup tomorrow, there’s nothing left?  And the washing  - I’ll have to wash those sheets all over again! Just let me go home to my grandchildren!’

Don Bosco could not reply; he was choked with emotion. He looked at his elderly mother and could only point to the crucifix on the bare wall. In silence Margaret understood, and like Mary before her, she would remain at the foot of the Cross. She picked up the trousers again and would stay until she died in 1856.

Margaret’s practical presence and hard manual work were essential in the early years of the Oratory but as she grew older she was joined by her sister, Marianna, whom the boys called ‘Auntie’, and by other local women, several from the Turin aristocracy, who took upon themselves some of the more onerous tasks which Margaret found increasingly difficult to perform. Don Bosco had long understood the need he had in most areas of the life of the Oratory for the co-operation of dedicated lay people who could not only help in most of the tasks in the Oratory but who could engage with civil agencies and above all, carry the spirit of the Oratory into society. He considered such co-operators as real members of his Salesian Society, to the point of including a chapter on them in the drafts of the Salesian Constitutions which he presented for approval to Rome. It was an anticipation of the recognition of the role of the laity in the Church. The time was not ripe for such an innovation; it would not be until 1876 that the Association of Salesian Cooperators was officially established with its own Statutes.

Margaret was long dead by then. Nevertheless, perhaps, more important than her actual work, were the foundations of the Preventive System which Don Bosco learnt in practice from his mother. By word and example, she had introduced  her sons to the knowledge and love of God  and the practice of the Faith in prayer, the sacraments and life of the Church. As they grew up, she had not spared  them corrections when necessary but never resorted to physical punishments, preferring to  induce an improvement in behaviour based on motives of reason and religion presented in an atmosphere of kindliness. This was the sort of nurturing, maternal love that his boys needed.

One hundred and fifty years after her death, on 23 October 2006, Mamma Margaret’s life of heroic sacrifice was recognised by the Church which declared her Venerable. The decree suggests that her life can be a model for all. It states, ‘The grace of God and the exercise of virtue made Margaret Occhiena an heroic mother, a wise educator and a good counsellor in the formation of the newly born Salesian charism. She is part of the spiritual aristocracy which shines out in the extraordinary number of holy mothers who live in God’s presence and in God, with a union the fruit of well-nigh continuous silent prayer. Often what is most simple is forgotten. The “most simple things” that Mamma Margaret continued to repeat through the example of her life is this: holiness is within reach and is for everyone and consists in faithful obedience to the particular vocation that the Lord entrusts to each one of us. In his apostolic letter,  Novo Millennion Ineunte, Pope John Paul II wrote that ‘holiness is the “high standard of Christian living” in the apparently commonplace of everyday life like the mountain of washing that Margaret attended to and mended during her busy days. Mamma Margaret teaches us that one can and one should “aim high” with courage. The little things of every day are the way to holiness’.